SpenglerFox works around the globe. Set your location to ensure you see the right content information for your country.

Countries are listed for each SpenglerFox office. If you do not see your country, it will default to 'Global'

Not since the Industrial Revolution 200 years ago, have we seen such immense and rapid changes in the industrial sector as we have seen since the breakout of the COVID-19 pandemic. Globalisation, which has accelerated exponentially since the 18th century, is now squarely under the spotlight, and no longer the focus it was just 1 year ago.

The expansion of global markets liberalized the economic activities of the exchange of goods and funds. The removal of cross-border trade barriers has made the formation of global markets more feasible and most manufacturers and have outsourced production of certain elements to emerging markets and markets offering vast and cheaper labour resources. This also led to export subsidization especially by large Asian economies, flooding overseas markets with cheap products, often at the expense of local industry. But COVID-19 changed all that. One of our clients, a major manufacturer of agricultural equipment, found their supply chain entirely disrupted as they were unable to source vital components from their factories in China. Elsewhere, several governments were unable to source much needed basic medication which too was produced in Asia. Much needed PPE manufactured locally was often found to be inferior compared to that produced by international suppliers, sending ripples through local industry.

As governments scramble to protect their faltering economies, absolute preference is given to the production of local products and often too at the expense of higher cost of production.

Due to a rapid increase in unemployment as companies around the world have had to reduce headcount to cut costs and preserve cashflow, many governments are increasingly pushing for locally produced materials, which help to create local jobs. Needless to say, increased tax income as a direct consequence of onshoring has come as a huge relief to many countries facing increasing debt burdens.

Many companies are reconsidering their reliance on production facilities in China and Chinese exports with the focus shifting to alternative production hubs closer to home.

For the manufacturing industry across North America, countries like Brazil and Mexico are receiving renewed interest due to their huge and cheap labour forces, good infrastructure, and proximity to home markets. Vietnam has also emerged as an ideal alternative manufacturing destination to China for US businesses, in part due to the US-China trade war and disrupted supply chains due to the coronavirus pandemic.

Industry 4.0 has been on the agenda of most global production companies for a while. And as businesses today adjust to the next “normal,” executives are grappling with the longer-term question: How will manufacturing and its supply chains look like after COVID-19?

Most important, they are much more likely to be more digital, as is already evident in the immediate response to the pandemic. Furthermore, we are seeing a rapid acceleration of process automation and automation, but it is also clear that companies using digital solutions are better-positioned to weather the storm. The ARA revolution is global – companies across USA, Europe and Asia are rushing to implement leaner and smarter processes affecting every aspect of the industrial sector. According to two of our clients involved in the production of robots, the impact will be substantial. Robots can work unsupervised, without a break, and can manage the work performed by scores of people. This is especially notable in the warehousing industry for example. Yes, this will reduce reliance on human labour which in turn will generate much needed cost savings and lead to significantly improved efficiencies.

In the face of the massive impact on unemployment numbers globally, governments have been rushing to support companies facing huge financial burdens due to an almost overnight slump in business levels and unprecedented loss of revenue as the pandemic spread, with subsidies to help protect jobs. Where job losses were unavoidable, governments provided support to industries most affected. Even prior to COVID-19, many of our clients who implemented sweeping digitalization reforms across their businesses, were retraining their staff in other areas, with little or no loss of jobs. We know too of companies who have delayed robotic process automation due to a lack of skills amongst their labour force and nascent talent pools, and labour shortages in specific areas of the global economy where in many cases the relevant skills are simply not available.

Some of the immediate and short-term implications and impact of increased ARA:

The Oil & Gas Industry is dead. Is it?

The collapse in the price of crude oil have resulted in a temporary end to fracking, and bringing global oil production to its knees. Many economies that have traditionally relied on revenue from oil exports are having to explore alternative sources of revenue. 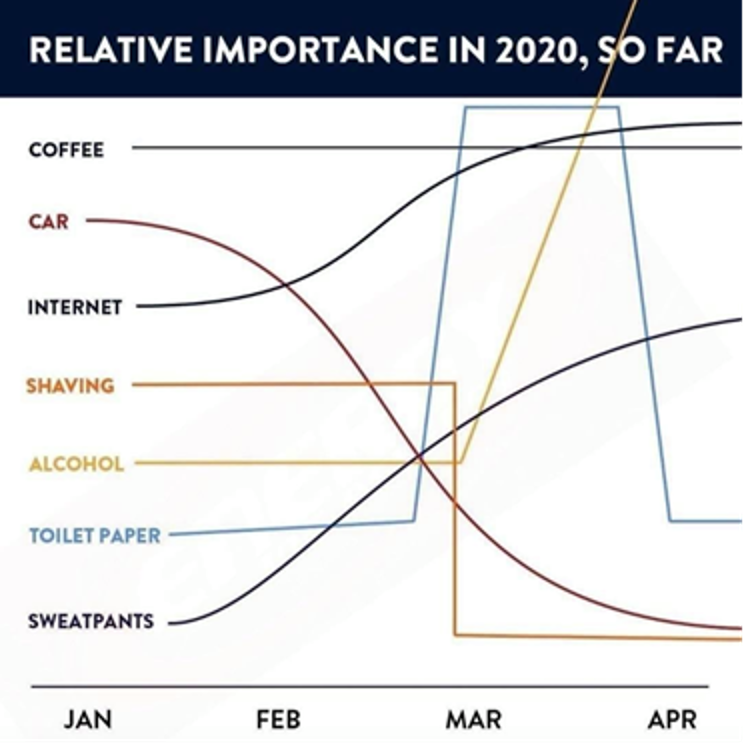 Whilst many commodities have seen significant changes in their relative importance since the start of the pandemic, as seen in the illustration above, one commodity, not listed, still is one of the most important commodities in the world, and that is oil (and of course natural gas). Oil and gas fuel our economies, our aviation industry. Cheap oil may very well also extend the lifespan of the combustion engine and will keep the traditional automotive industry for a while longer. We know too that many traditional automotive manufactures have increasingly shifted their attention to electric car production, but COVID-19 threw a proverbial spanner into the works. In most markets, governments are providing generous subsidies to the automotive industry for EV R&D and offering consumers equally generous cash subsidies for buying electric cars.

In the post-COVID19 era, many cash-strapped governments can no longer afford the generous subsidies for the manufacturing and sale of electric vehicles.

This, and ongoing concerns about the long-term environmental sustainability of the production of batteries for EVs, and the increasing concern around the rapidly increasing problem of battery recycling, are both factors that are shifting the focus to the development of hydrogen fuel cells as an alternative to EVs.

Hydrogen as a source of energy is experiencing a bit of a renaissance as it is considered to be much more environmentally friendly and supports the drive by many governments for greener solutions to their congested cities. One of our German clients, a leading chemical solutions provider who produce membranes used during the hydrogen extraction process from water, is citing a strong interest from Saudi Arabia, one of the world’s largest producers of natural oil & gas, in hydrogen extraction. Hydrogen as fuel can be transported in both gaseous and liquid forms. However, a better alternative still is to turn Hydrogen into Ammonia. Ammonia is much easier to transport, and is today seen as an interesting alternative fuel. The Kingdom of Saudi Arabia are building solar and wind farms to produce green electricity, which in turn will produce Hydrogen through the process of electrolysis. The hydrogen is then “combined” with Nitrogen from the air (using air separation technology) to produce ammonia. Ammonia can then be transported as it has a high density and hence is a good store of energy. Once it reached the final destination the nitrogen is released and hydrogen is again used as fuel.

On a different note, but staying with the automotive industry, many of our clients involved in the manufacturing of electronic systems and components for cars, have been reporting exponential growth even as the German automotive industry were showing signs of a downturn. Today, which was in the past the exclusive preserve of the luxury car industry, virtually every new car being produced is fitted with complex electronic systems as they are becoming cheaper to produce and consumers are demanding it.

Plastic, which of course is a by-product of crude oil and natural gas, has been receiving its fair amount of negative publicity over the years during conversations about global warming and environmental protection. Manufacturers of plastics continue to place the blame on the very legitimate environmental catastrophe facing us as a direct consequence of plastic pollution, on the irresponsibility of people who misuse the product. Plastic, after all, serves a vital role in our lives, and more so during the pandemic where plastic plays a vital role in keeping many products sterile and safe for use by humans. Until such time that there is a more environmentally friendly replacement for plastic, serving the same role, plastic will remain a part of our lives, and we are all responsible for its safe recycling.

In 2017, China’s R&D spending was about $280 billion, accounting for 2.12% of the country’s GDP and representing 20% of total world R&D expenditure, (on par with Europe (34 countries)) with the rate of R&D investment growth significantly exceeding that of the U.S. and the EU.

China is now the biggest trading partner of all but 6 countries in Africa, and that is not about to change post-COVID. Elsewhere however, countries like the USA have embarked on a trade war with China in an attempt to diminish China’s role both domestically and internationally, and thereby protecting its own interests. Notwithstanding, government funded R&D and innovation initiatives in the USA are still incredibly low and driven by the private sector.

Soaring public debt is placing severe constraints on discretionary spending towards innovation and R&D. In the face of shifting priorities during the pandemic, funding for these critical areas have been drastically cut back as governments across Europe are focussing on supporting their battered economies. The argument is being made that much of the spending towards employment subsidies should instead be used towards investment in innovation, digitalization and skills (re)training for the swathes of the population facing very uncertain job prospects due to skills in the wrong areas of experience in industries that will take a very long time to recover.

The industrial sector globally is undergoing a change in thinking as it responds to COVID-19 and tries to adapt to a “new normal” for which there is no textbook. There will surely be winners and losers, and history is being written about this once in a lifetime event. Much of what we know today will be redundant tomorrow, and what is certain is the fact that the acceleration of Industry 4.0 will affect every company and every job known to man today.

Is There a “Right” Style of Leadership?